To win, you must have a high-performance executive team.

Most executive teams are running on fumes.

Getting "the right people in the right seats" is necessary but not sufficient.

Most executive teams have unresolved conflict which impacts performance.

A misaligned executive team will never create an aligned company.

Most companies don't do anything to develop their executive team.

IS IT TIME FOR A SHIFT?

Are you ready to shift your executive team into top gear? 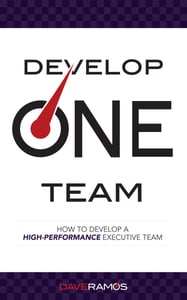 In his landmark book, Good to Great, Jim Collins introduced the concept of “first who, then what.”

So, let’s start by clarifying your “who.”

We believe that your corporate executive team is ultimately responsible for creating alignment. Therefore, Step One is for them to accept that responsibility.

This starts with your CEO. Your CEO must operate as the company’s Chief Alignment Officer.

Randy Papadellis, the former CEO of the cranberry cooperative Ocean Spray, referred to himself as the “Chief Alignment Officer.” Papadellis joined Ocean Spray in July 2000 as the Chief Operating Officer and was promoted to Chief Executive Officer in 2002. Here is how he described the transition,

“I believe the biggest difference between being CEO and COO is the job of alignment. When I became CEO, I realized very quickly that it was my responsibility to take the many constituencies we have in our business—our grower owners, our Board of Directors, our key suppliers, our key customers, or most importantly our employees—and making sure that they were aligned and moving in the same direction.”

Aligned and moving in the same direction! My sentiments exactly.

Second, the entire corporate executive team must embrace alignment as a critical corporate initiative. There are several reasons for this:

Let me say that again. A misaligned executive team will never create an aligned company.

If your executive team is running on fumes, perhaps The Pit Stop Program is for you.

GMC Trucks has a slogan, “We are professional grade.” (A great brand position, by the way.)

High-performance organizations are led by people who are “executive grade.”

These executives demonstrate a rare mix of skills, abilities, and behaviors. Here are some of the most important ones:

To win, your organization must develop leaders who are truly “executive grade."

DOES YOUR EXECUTIVE TEAM NEED A PIT STOP?
Copyright © 2022, SHIFTPOINTS, Inc. All rights reserved.
The SHIFTPOINTS logo, Decide One Thing, Drive One Direction, The Pit Stop Program, and The Top Gear Program are Registered Trademarks of SHIFTPOINTS, Inc.